See the Firefly review for more on the previous version of this toy.

Even when Slingshot was left out of the original configuration of Combiner Wars Superion in favour of the the helicopter Alpha Bravo not all hope was lost: looking carefully at Firefly's jet mode it strongly resembles the missing original Aerialbot both looking like Harrier Jump Jets.

On 9th January 2015 Takara teased their Superion with 5 jets. On the 22nd January Unite Warriors Superion was revealed containing a white repaint of Firefly as Slingshot. I promptly pre ordered a set with HLJ, despite already having the other four toys, but later the same day a TRU computer listing for Slingshot & Wildrider was found. On the 23rd of March a Diamond website listing for Quickslinger & Brake-Neck, assumed to be the same toys under a different name, was located. The next day Hasbro teased them on their Facebook page before officially revealing them the day after. At midday EST on the 30th April an embargo was listed and many websites revealed galleries and availability information for Quickslinger and Brake-Neck. By then however certain online retailers who source their stock in the far east had already received their stock and dispatched them. My set from Kapow toys arrived May 2nd!

If you've got Firefly you know exactly what you're getting: this is the original toy with all the red, bar the chest, and all the grey turned white. The legs, shoulder joints, and combiner connector are now black. The head is a new mould much close to the original Slingshot.

Save for some black paint covering the panels on the outside of the fist this is pretty much dead on what you want and completes my Superion.

The obvious repaint for most Aerialbots is as their G2 counterparts. G2 Fireflight however looks very much like his original version, with the exception of some detail on the wings and a silver robot chest which is already hinted at here.

Quickslinger could be redone as the gold G2 Slingshot, though hopefully in a more resilient non GPS prone version!

Both are strong candidates for a Decepticon repaint, possibly as part of a larger sized Combiner Wars version of Sixwing. I find it incredible that 30 years after the first combiner was released we still haven't had a full sized Decepticon Air vehicle combiner, forms more aligned to the original forms of the 1984 Decepticons.

See the Dead End review for more on the previous versions of this toy.

Lots of fans were upset when Combiner Wars Superion was released with Alpha Bravo replacing Slingshot. This was tempered slightly when Unite Warriors Superion, including Slingshot repainted from Fireflight was announced. I already had Silverbolt and the three limbs released in the west and I still pre ordered one.

We already knew Menasor was shipping with Offroad replacing Wildrider so speculation turned to which Stunticon mould would provide the new version of Wildrider in the Japanese Menasor: Dead End or Breakdown? I could see the argument for Breakdown being used: Wildrider is more angular than Dead End but Breakdown's vehicle mode is easily identifiable as a Lamborghini so thought Dead End was probably going to be the one repainted.

On the 22nd of January 2015 a Toys R Us listing for Slingshot & Wildrider was found, leading to speculation that there would be a western release of the limb recolours as an exclusive. The long suspected Japanese version of Wildrider using Dead End was revealed in a magazine on the 20th March. On 23rd March a Diamond listing for theses toys was found with Hasbro teasing them on Facebook the next day under the names Quickslinger and Break-Neck. The full versions were revealed the day after on 25th March by which time pre orders were opening up everywhere.

Although I get that for various reasons the name Wildrider and his persona might be wanted to be avoided the name Brake Neck seems a little odd given there's already a similarly named Breakdown on the Stunticon team.

Dead End becomes the first Combiner Wars mould to be used three times with Brake-Neck. Generally the car mode for Brake-Neck looks pretty good swapping Dead End's burgundy for grey/silver but the mid arm panels, coloured red, form part of the side of the vehicle and break up the grey body work. A little bit of paint to make the line of the top of the door the same colour wouldn't have gone amiss.

Transforming to robot mode reveals more colours. The Burgundy of Dead End's chest and chest panel are the only parts of that colour not to become silver/grey, they're more of a pale grey. The pale grey of the knees, waist and combiner wars connector become black. The darker grey of the upper legs, hands, mid arm pieces, neck and combiner connector become red. A new head, featuring Wildrider's signature spikes sticking out the side is cast in a similar colour to the car body with a painted red face.

Given that an exact car match for Wildrider was unavailable this is a pretty good attempt. The red breaking up the top of the door and not quite matching the rest of the red stripe does annoy me though!

Don't know how these got here to the UK so quickly when I only ordered them on Monday from Robot Kingdom in Hong Kong. And they dodged Customs! 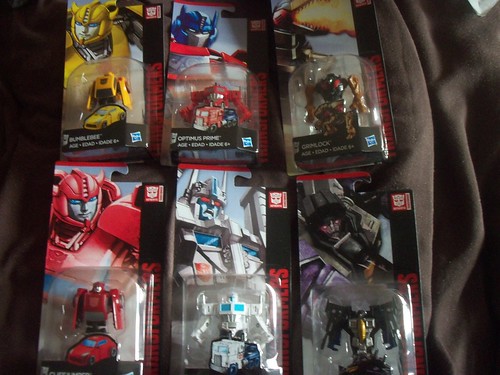 Cliffjumper is the legend that's existed the longest abroad without making a western appearance: Henkei Cliff was released in 2009 in C-18 Minibot Attack Team with Beachcomber & Gong (Brawn) 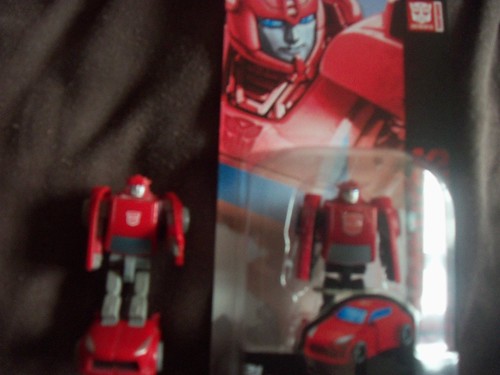 Straight off the bat even before we get him out the packet we can see Cliffjumper has a larger Autobot symbol than his Henkei predecessor. 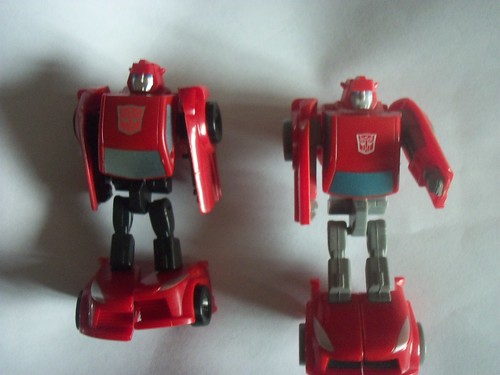 Once out another change is clearly revealed: all of Cliff's grey, including the tires, is now black. Sadly Cliffjumper has lost the red cuff paint app that Cliff had. 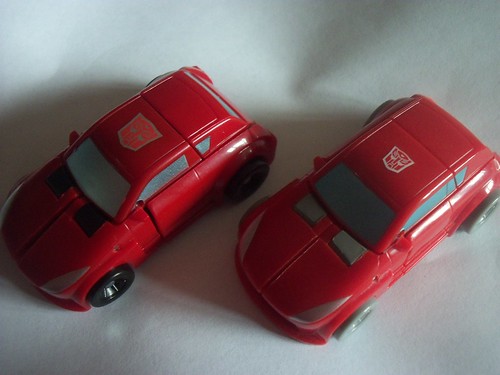 Vehicle mode shows the windows are more silver on Cliffjumper.

Like this, much prefer the black to the grey :-) 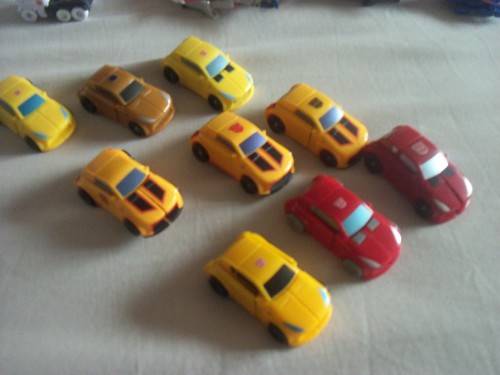 Like Cliffjumper, Skywarp has been available in Japan before as part of the Chronicle EZ Collection Wave 2 in 2011. Those who were clever bought in advance on the strength of a black and white picture, guessing and seeing how high Thundercracker went. Case sold out as soon as the colour picture surfaced and that was that as Skywarp copied his brother and then some. Demand for a western version increased when Thundercracker had a version with c-clip hands released as part of GDO Generations and then Starscream recieved the same upgrade as a dollar store variation. 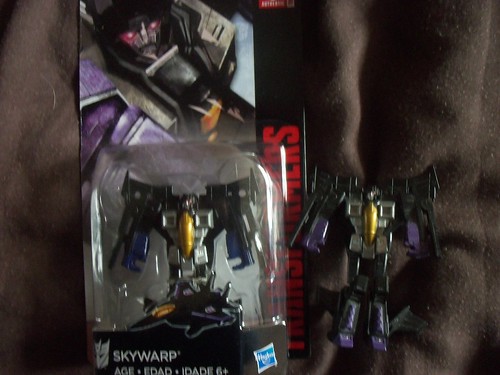 In the packet Skywarp's paint apps appear to be a more blue purple than his EZ Collection counterpart. 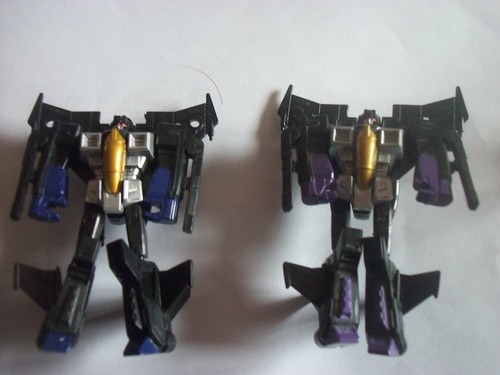 That's confirmed out of the packet where we can see he's also lost the blue pueple paint app at the front of the legs. Although he has the modified hands and wing holes from GDO Thundercracker sadly, as AOE/Classic Legion Starscream led us to expect, lost his null rays. So if a 3p company/Shapeways designer could oblige us in grey, black and silver I'd be most pleased. 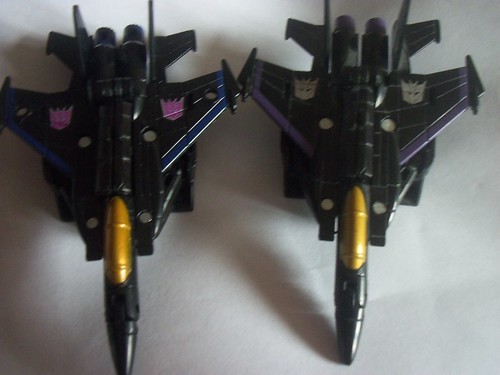 Jet mode looks FAB, the bluer stripe along the wing really works together with the full colour Decepticon symbols as opposed to the silver ones his EZ Collection version had. The Null Rays are really missed here. His engines have the same inexplicable hole through them as all the c-clip/3mm peg versions of this toy do. 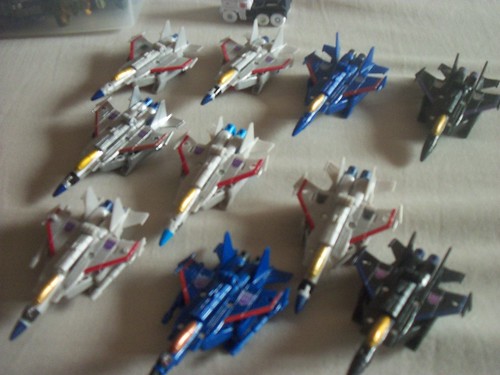 RTS Legend Optimus was released in late 2010/early 2011. How has it taken FOUR YEARS to get it repainted in white in Ultra Magnus? 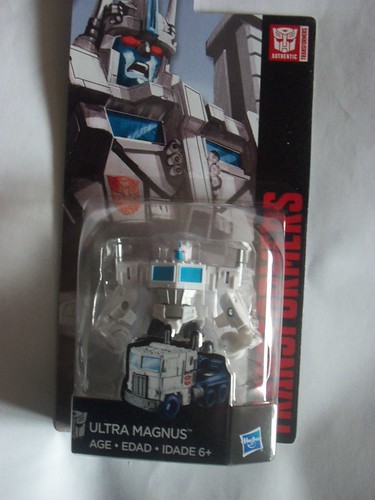 The artwork asks a different question: why has there never been an all white G1 Ultra Magnus super robot? Hasbro/Takara, I have money for you! 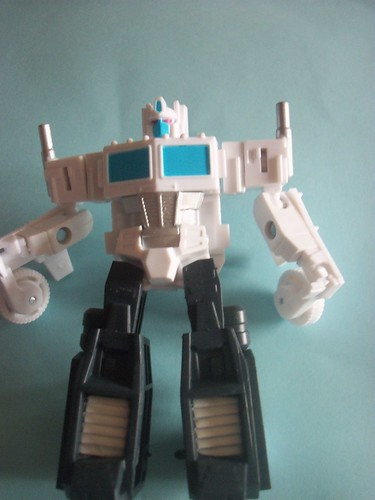 Robot mode shows that like the Target exclusive Classics Magnus Hasbro have been unwilling to completely go down the all white route. The colour used on the legs is grey. Love the blue faceplate, crest and windows. He has GDO Motormouth's c-clip hands but alas not his sword. 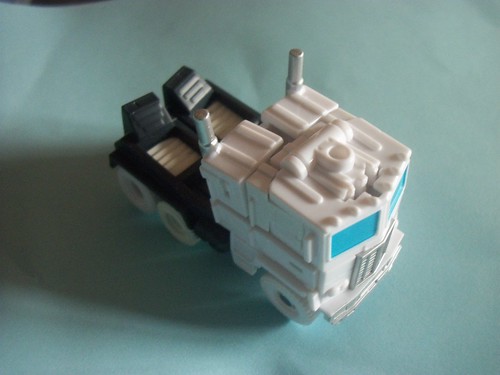 Vehicle mode: oh to swap the white of the wheels and the grey of the flatbed round! The middle tire is evidentally painted too which look too great. Almost tempted to get a spare Optimus and do a wheel swap.

Very grateful to finally get one of these but you can't help feeling he could have been better! 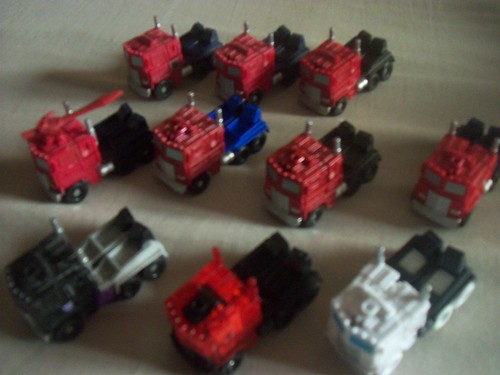